If you’ve sipped a lemonade at Phantom Ranch, or stayed at Bright Angel Lodge on the South Rim, you’re familiar with Mary Colter’s work. She was a lady ahead of her time, where she designed and supervised the construction of six of Grand Canyon National Park’s most famous buildings, all of which still stand today. Mary Elizabeth Jane Colter was born in 1869 in Pittsburgh, Pennsylvania, and while her family lived briefly in Texas and Colorado, the Colter’s finally settled in St. Paul. She desired to pursue art as a career but couldn’t due to family opposition. It wasn’t until the death of her father that she moved toward following her dream. She was, at the time, one of the few female architects working in the U.S.—a woman in a man’s world who had to fight hard for recognition.

Mary attended the California School of Design in San Francisco, studying art and design. Few universities taught architecture, so she apprenticed with a practicing architect. This was unusual for a woman, but Mary was determined. In 1892, at the age of 23, she began a 15-year teaching career at the Mechanic Arts High School, an all-boys institution, back in St. Paul.

Through informal contacts with the Fred Harvey Company, Colter eventually landed a job as an interior designer of the Indian Building adjacent to the Santa Fe’s new Alvarado Hotel in Albuquerque, along the main line. As a full-time architect in the Fred Harvey Company, Mary Colter would build six buildings on the South Rim of Grand Canyon National Park in Arizona. Colter was a perfectionist, who spent a lifetime advocating and defending her aesthetic vision in a largely male-dominated field. In 1948, at the age of 79, Colter officially retired from the Fred Harvey Company. On January 8, 1958, at the age of 88, Mary Elizabeth Jane Colter died.

At the time, American architecture followed the fashions of Europe, but Mary preferred to let her conceptions grow from the land, paying homage to the Native Americans who inhabited the area. Her creative free-form buildings at Grand Canyon took direct inspiration from the landscape and served as part of the basis of the developing artistic aesthetic for appropriate development in areas that became national parks. Her designs include Hermit’s Rest, Lookout Studio, Bright Angel Lodge, Hopi House and the Watchtower, along with Phantom Ranch, situated at the bottom of the canyon.

Located on the South Rim of Grand Canyon National Park, Arizona, these buildings* highlight the ingenuity of Colter, chief architect and decorator for the Fred Harvey Company from 1902 to 1948.

*As a group, these buildings were designated a National Historic Landmark District on May 28, 1987. When the Fred Harvey Company noticed that native American craftspeople were doing a booming trade selling their arts and crafts at railroad stops, they began planning Hopi House, a dedicated marketplace for native American wares on the South Rim.

Located next to El Tovar Hotel, Hopi House is a prime example of Colter’s unique site-specific style. The building was built by Hopi craftsmen and constructed using local materials and salvaged items, such as Civil War-era Western Union telegraph poles and rails. Hermit’s Rest was built in 1914 as a rest area for tourists travelling on coaches operated by (you guessed it!) the Fred Harvey Company on their way to what was once Hermit Camp.

This simple log-and-stone building was designed to look like a rustic getaway that Louis Boucher, a trail guide and infamous “hermit” who once lived in the area, would have built. With this in mind, Mary Colter actually ordered the fireplace to be intentionally streaked with soot to add an aged effect.

Hermit’s Rest is located at the western end of Hermit Road and is the western terminus of the Rim Trail. Situated just west of Bright Angel Lodge, Lookout Studio is one of the most prominent examples of Mary Colter’s unique style.

Colter’s design for Lookout Studio draws heavily from its natural surroundings: the native stone exterior and multi-level design blend in seamlessly with the layers and edge of the Grand Canyon, while it’s asymmetrical roofline mimics the Canyon’s natural shape to create the illusion that the Studio is an extension of the Canyon’s steadfast stone walls.

Today, Lookout Studio offers multiple viewing platforms and a gift shop where Grand Canyon visitors can pick up a memento of their adventure. Mary Colter’s use of on-site fieldstone and rough-hewn wood was largely a product of necessity based on the Ranch’s remote location, but the use of native materials to construct National Park Service Structures soon became the default for NPS and Civilian Conservation Corps buildings. In fact, Mary Colter’s design for Phantom Ranch influenced an entire genre of “parkitecture”, often referred to as “National Park Service Rustic”. Mary Colter also designed the many cabins that surround the lodge. Her eclectic approach to sourcing materials for these cabins mimics the effect and appearance of a diverse settlement built over time.

The cornerstone of Bright Angel Lodge is its fireplace. Colter’s design features native stone (hauled out of the Canyon by mule) arranged from floor to ceiling in the same order as the geologic strata you’ll see as you descend into the Canyon on the Bright Angel Trail. 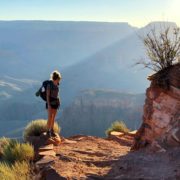 Safety Tips at Grand Canyon: How Not to Die 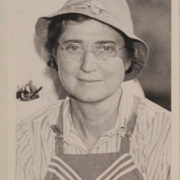 Elzada Clover: The Botanist Of The Grand Canyon 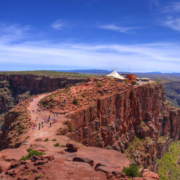 Here are some things you can do at Grand Canyon West 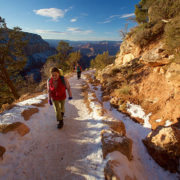 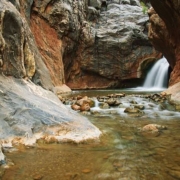 Barbara Washburn: The Accidental Adventurer Who Mapped The Grand Canyon
Scroll to top